Milo of Croton 6th Century BC

Milo was from the Magna Graecian city of Croton

He is an iconic historical figure among strongmen and weightlifters. He was an incredibly successful Greek wrestler, holding six Olympic victories and twenty-six titles. Milo has been depicted in works of art by Pierre Puget, Étienne-Maurice Falconet and others. Literary allusions to this story appear in works such as Shakespeare's Troilus and Cressida, and Alexandre Dumas's The Man in the Iron Mask. His hometown of Croton was renowned for producing high-level athletes, this legacy ending with him as its greatest production. 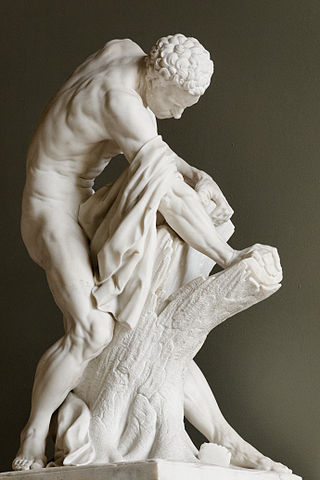 He won the boys' wrestling and thereafter five men's wrestling titles between 536 and 520 BC. He also won seven crowns at the Pythian Games at Delphi (one as a boy), ten at the Isthmian Games, and nine at the Nemean Games. Milo was a five-time Periodonikēs, a "grand slam" sort of title bestowed on the winner of all four festivals in the same cycle. Milo's career at the highest level of competition must have spanned 24 years.

Milo was defeated in his attempt at a seventh Olympic title in 516 BC ending his wrestling career. A young wrestler from Croton, the victor who practiced the technique of akrocheirismos—literally, 'highhandedness' or wrestling at arm's length—and by doing so, avoided Milo's crushing embrace. Simple fatigue took its toll on Milo.

Outside of records of his victories, accounts of Milo’s life take on an exaggerated, legendary flavor. Tales told of his great appetite, a daily diet of 20 pounds of both meat and bread, as well as the gizzard stones of roosters, all washed down with 18 pints (8.5 liters) of wine. His training is even more legendary! According to stories he carried a newborn calf on his shoulders a certain distance every day. As the Calf grew so did Milos strength. When the calf grew to a bull, Milo supposedly carried it his customary distance before slaughtering, cooking, and eating the whole beast in one day.

These awesome eating and training habits must have been the secret to his epic size, notable strength and athletic abilities.

The ultimate demise of Milo came as he was walking in the forest. He came across a tree trunk split with wedges and decided to test his strength on it. As he attempted to split the trunk, the wedges slipped out and trapped his hands in the crevice. With his hands trapped Milo was unable to defend himself and he fell victim to wolves.

So why have we shared this with you here today? Well the simplicity of eat big, lift big, and consistency still applies but also, watch where you put your hands.

It rubs the lotion on the skin